Fjord Salmon trout is an exclusive fish and the name for fresh farm raised trout from Norway.

Salmon Trouts are raised in cold, clear fjords in western Norway, and one of the hatcheries is located by Folgefonna glacier which is around 10 000 year old. For one year the fish swims around in crystal clear water from the glacier before it is transferred to nearby fjords where it enjoys a combination of salty water from the sea and fresh water from the glacier. Thus, it has earned its name; Fjord Trout – Kissed by a Glacier.

Season: Lerøy Fjord Trout is available all year round.

Salmon is nutritionally an excellent product. Salmon have a natural high content of protein and contains a lot of the healthy polyunsaturated fatty acids. Therefore also high in Omega-3 fatty acids (EPA and DHA) and rich in the fat soluble Vitamin D. Salmon is also a good source of the minerals iodine and selenium.

Norwegian Salmon Trout is a very useful raw material and the possibilities is unlimited and only almost limitid by your imagination and creativity in the kitchen. Salmon is sold fresh or frozen, in portion, fillets or as a whole gutted salmon. Salmon fillet can be marinated, smoked or hot-smoked. Fresh salmon can be used raw for sashimi, sushi, pokè or ceviché. Farmed norwegian salmon is excepted the demand of freezing before raw consumption as the farmed salmon have only had formulated feed in its diet. Therefore no risk of anisakis.
Salmon can be simmered, roasted, grilled, baked, seasoned and is suitable in soups and caserolles. Smoked salmon can be used on a sandwich, in salads and omelettes, with pasta or in a wrap. Have you tried salmon in a fish taco?

Norway have been a pioneer in farming of salmon, and have since the break through of farming in sea pens in the 1970’s kepts its position as the worlds leading farmers of Atlantic salom, where Lerøy Seafood Group is the second largest company of farmed salmon in the world!

The production and farming of salmon is a resource efficient and climate-freindly form of food production. Lerøy have locations all over the coast of Norway ranging from the county Rogaland in the south all the way up to Finmark in the north.  It takes approximately 2-3 years from a salmon roe hatch until a finisihed grown and harvest ready salmon. Through these years the salmon goes through different life stages.

Broodstock salmon is the ancestors to the Lerøy salmon and originates from norwegian rivers where traits from the wild salmon was selcted and bred.Extensive breeding have improved characteristics as growth, color and quality of finished products. The productions of salmon starts in rearing tanks on a land based fresh water farm. Just as for wild salmon in rivers, the fertilization of the roe is done in fresh water. The roe is ready to hatch after approximately 60 days at maximum 8°C before it hatch (or approx. 500 daydegrees).

When the roe hatch into alevins which have yolk sacs which they use for food the first period of their life span. After 4-6 weeks when the yolk sacs have been used up the alevins have to start to feed. At this point they are known as fry and have been weaned over to formulated feed known as pellets. Then the juveniles are moved over from the hatching tank to a larger rearing tank. The juveniles known as parr for 1,5 months (480 daydegrees at maximum 12 °C). After 8-15 month in freshwater the salmon is ready for transport to the sea.  It ways now approximately 60-200 g. Since the hatch the juvenile salmon have gone through a transformation from parr to smolt in a process called smoltificatio, where the salmon are getting ready to adapt to the life in sea water. Before the transfer into sea the smolt is vaccinated to be ready to life a robust life in sea. In the future Lerøy may also wait to tranfer smolt to sea until it have reached 500 g so thet the life span in sea water is shortened and may also be a solution to reduce the problem with sealice.

The smolts are transferred to the sea farms with wellboats and put in sea cages. These sites are called production farms and extensive farming at sea. The salmon is grown at the farm for 14-22 months until fulle grown. Optimum sea currents, cold water and oxygen rich fjords is a blessing for the production of atlantic salmon. The cages contains 97,5 % water and maximum 2,5 % salmon. This is the maximum allowed density, but the normal density ranges below the maximum allowed density.

The salmon is placed in waiting cages outside the harvest plant. The purpose is to realse the well boats transport capacity, calm down the salmon and provide the harvest plant with contiounious supply of salmon. The salmon waits in the cages from 24 hours to maximum 6 days before it is gently pumped in to the factory. The salmon is gently pumped and swim up current in to the stunner. The salmon is in regards of the fish welfare properly stunned before it is bled. This is also to maintain the quality of the salmon and also if the salmon is not stressed we get a better product. Salmon is chilled and packed with ice to remain the good quality. The correct packaging also contributes to remain the shelf life, freshness and quality of the salmon. For frozen products quick freezing is key to preserve quality.

How To Make: Honey Garlic Salmon 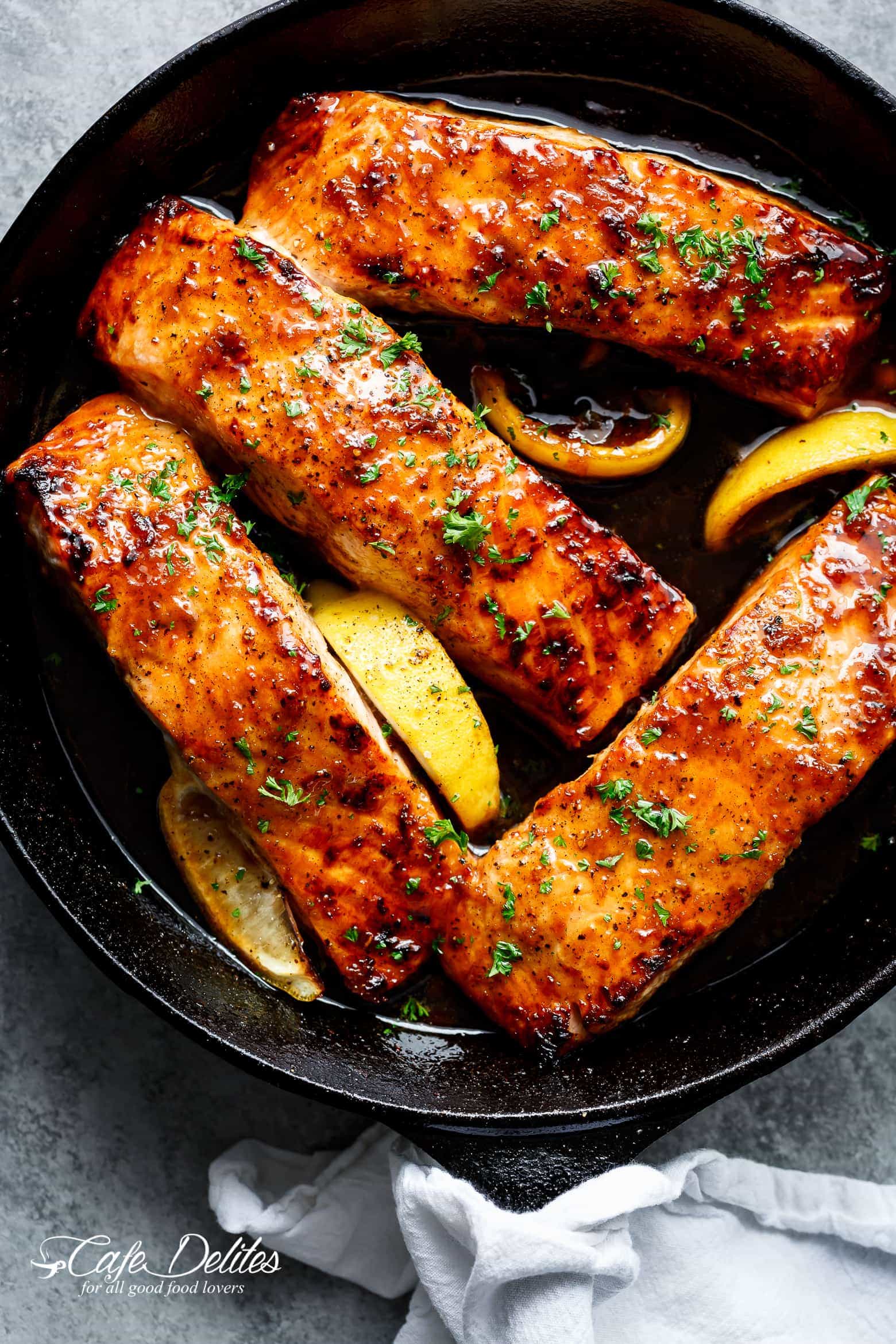